NORTH OKANAGAN – An infusion of federal funding and a renewed national focus on tourism is welcome news to the Armstrong Spallumcheen and Greater Vernon chambers of commerce.
On May 23, Tourism Minister Melanie Joly participated in a sold-out roundtable discussion hosted  by the chambers at Fairways Bistro in Armstrong.
“We thank Minister Joly for taking the time to stop in our region and it was exciting to learn more about the recently announced federal tourism strategy,” said Peter Rotzetter, Armstrong Spallumcheen Chamber president.
“Tourism is increasingly an important component of the local economic fabric, and the federal strategy may create opportunities for us through strategic planning in rural areas, food tourism, attracting more visitors during the shoulder seasons and indigenous tourism,” added Deb White, Greater Vernon Chamber director.
The federal government’s Canadian Experience Fund will pump $60 million into the country’s tourism industry over two years. The fund has been launched at the same time that there is there significant competition from international destinations.
“If Canada is not playing a bigger role, other countries will take the role we used to have. Other countries see tourism as big business and are investing. Canada needs to make sure it’s playing a bigger role,” said Joly.
The goal is to create 25,000 new tourism jobs across the country by 2025 and increase shoulder season traffic by one million more visitors during that period.
During the question and answer session, several issues arose, including funding for the rail trail from Armstrong to Sicamous, the need for additional resources for indigenous tourism, support for fairs, affordable housing for tourism workers in local communities and the need to keep the backcountry open while protecting caribou.
“It was important for Minister Joly to hear first hand the issues that directly impact tourism operators and communities. We are confident she will take this information back to her colleagues in Ottawa,” said Rotzetter.
“By working together, the Greater Vernon and Armstrong Spallumcheen chambers were able to demonstrate how important tourism is to our region as a whole,” said White.
About 90 people attended the roundtable, including representatives from the Splatsin and North Okanagan-Shuswap local governments as well as MP Mel Arnold and MLA Eric Foster. 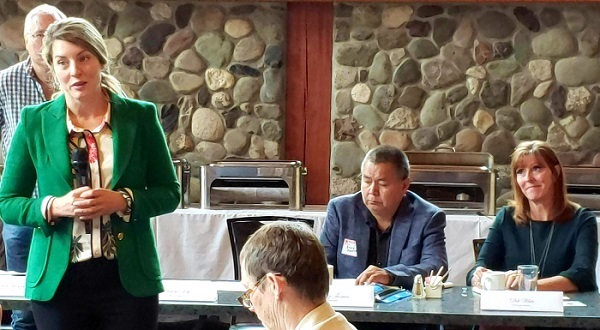