VERNON – Federal Agriculture Minister Marie-Claude Bibeau has heard firsthand how crucial agriculture is to the economy of the North Okanagan.
Bibeau took part in a roundtable discussion hosted by the Greater Vernon Chamber of Commerce Tuesday that included food producers, processors and local government representatives.
“I’m ready to jump in for the whole country,” said the Quebec MP who was appointed agriculture minister by Prime Minister Justin Trudeau March 1.
“Agriculture is a strong industry and contributes to the economy across the country.”
Among those that Bibeau met with was Tony Dyck, founder of Okanagan Spirits, the venue of the roundtable.
Dyck told Bibeau that distilleries are charged an excise tax for their product and that’s limiting private sector investment and job creation.
“Small distilleries across B.C. and Canada need some help,” he said, adding that Okanagan Spirits sources its fruit and grain locally.
A similar message also came from Melissa Dobernigg, owner of The BX Press Cidery.
“Alcohol production is a way to revitalize the family farm and agriculture. It’s a way to add value to (culled(fruit that no longer has a value,” said Dobernigg.
Labour was also on the agenda as growers experience some challenges with the foreign worker program.
Sukhpaul Bal, president of the B.C. Cherry Association, suggested to Bibeau that the federal government allow growers to hire people visiting the Okanagan on a tourist visa.
“There are a lot of people who want to work here for the short fruit season, but don’t have the (work) visa,” said Bal.
Local producers are also concerned about Canada’s trade relationship with China, particularly because 75 per cent of B.C.’s cherry exports go to China (not including the U.S.).
Representatives from the City of Vernon and the Regional District of North Okanagan participated in the roundtable and Mayor Victor Cumming urged the federal government to help communities address a lack of housing, which is impacting the economy.
“We have the employees but we need the housing,” he said.
Others at the roundtable included the B.C. Fruit Growers Association, 4-H, Salade Excetera and Mel Arnold, North Okanagan-Shuswap MP.
“We thank Minister Bibeau for taking the time to stop in Vernon and meet with our members and other stakeholders as a strong and vibrant agricultural sector is critical to the North Okanagan’s economy. The sector has considerable potential for job growth,” said said Dione Chambers, Greater Vernon Chamber of Commerce general manager.
“We will continue to lobby the federal government to support that growth, and our Chamber is actively developing policy related to distilleries and the excise tax.” 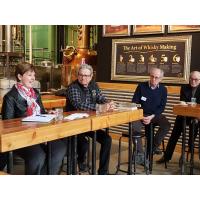